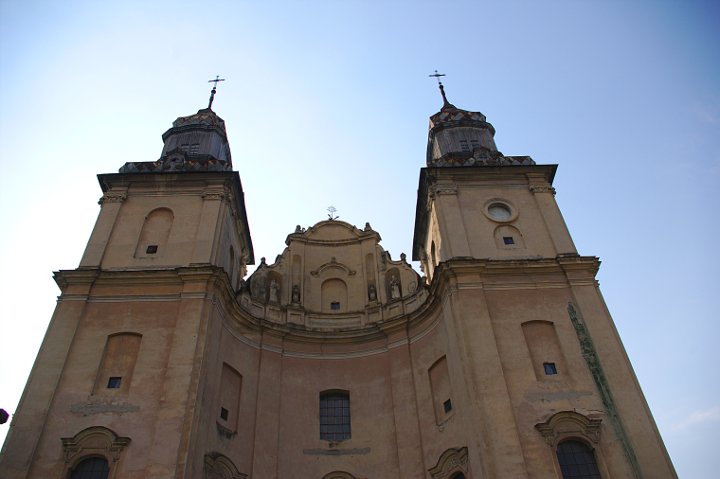 The majestic cathedral is the main architectural dominant of the town, which can be seen from almost all its points. It was established simultaneously with the castle, in 1627. It consists of a church, cells and unusual bell tower.

The monastery was built almost simultaneously with the castle, but the complex is kept in a slightly different form. In 1755 it was rebuilt in Renaissance and Baroque style. The interiors have applied so-called "illusory painting." There were preserved partially the altars with sculptural decoration of the 18th century (by A. Osinskiy), the fragments of mural paintings of the late 18th and 19 centuries. When we were there in 1999, the church was restored. There are only fragments which are preserved from the whole paintings, as well as from the magnificent carved decoration of the monastery.

The monastery was one of the most influential on Podillia - until there started Austro-Hungarian times (1785) when the institution was " secularized" by the order of the emperor. There were philosophical studies and provincial chapters at the Monastery.

Since 1768 the monastery operated the hospital, a shelter for the poor and sick, and since 1777 - the Parish School and Latin High School. There received education such personalities as Ignacy Dashynski (Ignacy Daszyński, politician, the Prime of Lublin government in 1918, Marshal of the Sejm during 1928-1930), and the archbishop, Commander of the Order of White Eagle IgnacyTokarchuk (IgnacyTokarczuk). The High School received the official status in 1924. During the Polish-Ukrainian War (1918-1920) the Monastery suffered greatly, and in the postwar period it was turned into the ruin.

Bell tower (1746-1755, architect Johann Ganz) is part of Bernardino monastery complex. It is located on the north of the church and is adjacent to the defensive walls surrounding the complex. The bell tower is made of stone and brick, rectangular, two-tier, the facades are plastered, segmented with blades and separated with cornices. The windows have arch and rectangular shapes. The pediment is decorated with the sculptural figure of the saint. The gable roof has wooden structures, the roof is made of galvanized iron. There are semicircular vaults in the cellars. Unlike the church, the bell tower was not damaged by fire in 1788, and therefore retained its original baroque forms.

Bernardini returned to the city in 1990. Now those times when the machines of the military factory stood in the Monastery, and the church was a store for fertilizer are behind us. Now the temple is gradually brought back to normal, although his basement is thought to be still full of bones and skulls. It is difficult to say whether they the "souvenirs" from the past centuries monks, or from later totalitarian regime’s victims.

There is interesting in architectural terms Uspinia Church which is situated not far from the church. There happened a disaster in 1999: a few houses in the center of Zbarazh failed. The landslides continue still, which puts the old stone house in the center at risk.