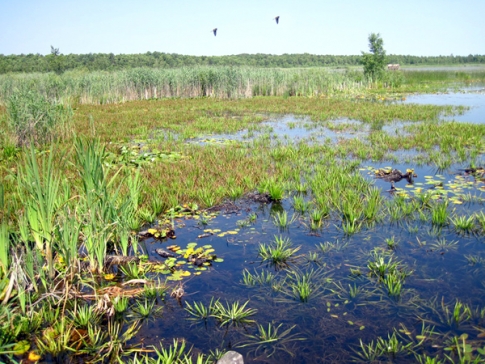 The Somine marsh massif completely occupies the territory of Karasinsky forestry, the water area of ​​which reaches almost 60 hectares, and the adjacent bogs. The maximum depth of the massif is 13 m. The bottom is sandy. Almost the entire area is a transitional swamp, but there are also upland areas, which are very few in Ukraine. By the nature of vegetation, this massif reflects the main features of Western Polissya, which is characterized by peat bogs. Somine swamp belongs to the large swamps of Ukraine, preserved in its natural state.

The whole complex "Somino" is adjacent to the lake of the same name and consists of a large number of tracts. The largest of them are the tracts "Kreminne-Sekhivske", "Lyubakhivske", as well as the tract "Banky".

The Somino marsh massif has a great scientific value, as one of the few typical massifs of Polissya, which has been preserved in its natural state. It is characterized by a large variety of plants, many of which are listed in the Red Book of Ukraine, as well as in the International Red Book. An example of such a plant is the snow-white water lily - the most beautiful flower of blue freshwater, the only plant that has existed in the flora of Ukraine for millions of years without any changes. The size of the water lily flower ranks first in Ukraine and reaches 20 cm in diameter. The almost continuous sphagnum carpet is dominated by fluffy fruit sedge, and reed shoots rise above it. On small depressions there is a rhinlopora white, down. Between the sedges grow small willows, Lapland and rosemary - these are glacial relics. Cranberries turn red on the hills, among which andromeda flowers turn white. On Lake Somino, researchers were lucky to find one of the rarest orchids - the marsh harbary.

Together with blueberry willow, Schweichzeria marsh, sundew and bulbous sorrel, it is listed in the Red Book of Ukraine.

The lake is surrounded on all sides by swampy forests - alders, birches. Beavers are found here, you can watch them at work. The lake is characterized by a low content of organic and inorganic substances in the water; water in the composition of hydrocarbonate-calcium-magnesium (typical for lakes of the forest zone). The hydrological complex of the lake plays an important role, namely, it regulates the groundwater level of the surrounding areas. This is one of the few typical mesotrophic swamps of Western Polissya, preserved in its natural state.

Vacationers will be able to enjoy unforgettable hours of relaxation and wrap themselves in a natural aura for a long time.