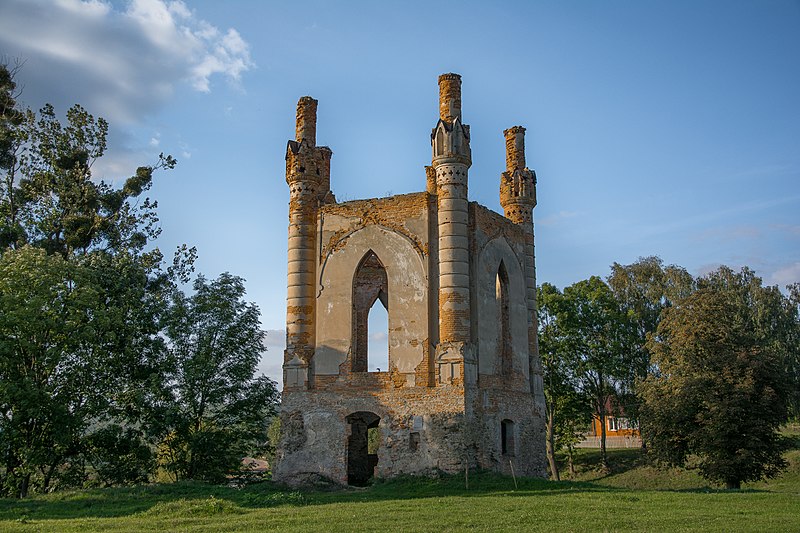 The village of Novomalin has been known since the 14th century in 1392. Vladislav Yagailo presented this area to Svydrygail. Even then there was a small castle built in the XIV century. on a hill above the river Svitenka. It was planned to be regular, with five pentagonal corner towers connected by walls, an entrance gate and a bridge across the moat. The castle was rebuilt many times. In the seventeenth century. Malinski added a baroque palace to the castle. At the end of the XVIII century. the Novomalinsky estate became the property of the Sosnowskiy. With them, the castle ensemble acquired the features of secular architecture and was considered one of the most beautiful magnate residences in Volhynia.

In 1866, the provincial newspaper wrote: "Now the castle has been converted into a palace ... surrounded on three sides by a pond, on the fourth - adjacent to the mainland and separated from it by a moat, through which now goes a stone bridge that was once a drawbridge". Thus he was reflected in the lithograph on the drawings of Napoleon Horde.

It was here that Tomasz Oscar Sosnowski was born - a Polish sculptor, a representative of neoclassicism, one of the prominent figures whom Volyn presented to the world.

Sosnowski's exquisite, original works adorn the museums of Warsaw, Krakow, Vilnius and Rome. The land of Volyn, remembering its outstanding son, also preserves his sculptures, which are not inferior to the classics of world art. One of them "Madonna and Child" is presented today in the exposition of the Ostroh State Historical and Cultural Reserve.

Today there are ruins of a castle and a chapel - a defensive tower.